Hanging out with heavily armoured dudes. Chills; I tell ya!

Catherine Croft and her gang did a wonderful job organizing a great day for the kid-nerds at Mill Village Consolidated School for the May the 4th Be With You event, and I was lucky enough to get to go.

The gang from Maritime Heavy Armour (https://www.facebook.com/MaritimeHeavyArmour?fref=ts) thrilled the kids, and me, by showing up and posturing with us all in an appropriately menacing  way.

We played some tabletop 40K, chatted about figs and gaming, and I got to do a dry run of my book promotion in front of real people. So that was cool.

And my mom bought me fries.

It was the only event of it’s kind permitted by the Lawyers of the Empire (Star Wars, not Warhammer, the Inquisition would never have allowed such a thing) to show a screening of all the Star Wars movies. Catherine even had a large outdoor projector, and showed it as a drive-in feature. 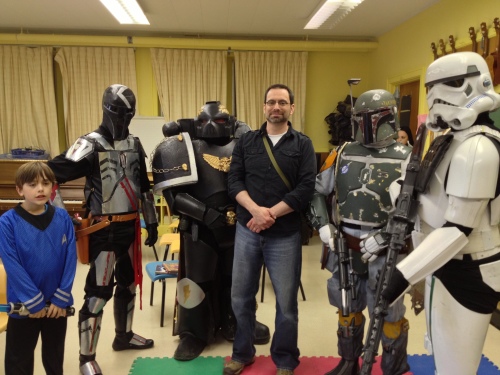 The Vulcan intimidated me most.

One never usually gets this close to a Space Marine. And Deathwatch sightings are especially rare. And one never, never gets to actually HUG a Deathwatch Space Marine. But I did. Turns out I shared an ancient secret Mechanicus armour technique, and he was most grateful. And hugs are nice. He deals with a lot of Grim Darkness, so I thought he could use the bro-love.

And then there was THIS, which the caricature guy did for me, which shall now be framed in my office. Terribly, I never caught his name: 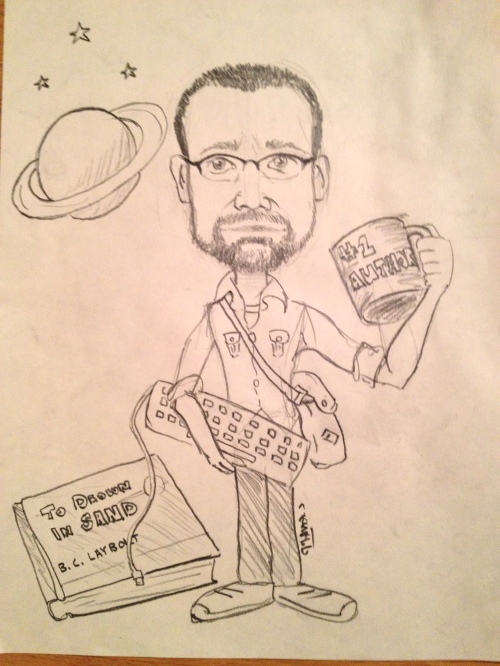 Awesome time had by all!

The Art of Blogging

OUT OF STANDARD BOOKS

Little flecks of inspiration and creativity

Exploring What Captivates, Inspires, and Intrigues Us.

Be Afraid of the Dark...

writes a short story every week