My Father Died Just Over Three Months Ago. I Never Thought From Such Pain Would Come peace.

My father died three months ago.

That sentence alone has more weight and mass than most.

My father was not my hero. I had seen him three times in about thirty years, and we never spoke. The history between us is long, dark, and unkind. I’ll write about all that toxic pathology someday. It will make quite a book.

When my brother asked me if I would go see Bill (as he was known to me then; I took substantial pride in denying him his rank, as he had never earned it), I was ready for it. Bill had a stroke on New Year’s Eve, and when they scanned him they discovered a “massive tumour” in his brain. I’m an RN. I know that when radiologists, who usually never use extreme words in their assessments, told the patient something was “massive”, then things are Very Bad.

I also know that Brain Cancer is often secondary to Lung Cancer, and they had found tumours on both of his lungs. That meant that if the cancer had gone bilateral and to the brain, he was what we call in the business “loaded”: if he were to undergo surgery, they would find tumours everywhere and simply sew him back up.

So, Bill’s doctor gave him the options he had at hand: undergo Chemo (to delay the growth of the tumour, but by no means save him or stop its progression), or do nothing, because it was going to kill him anyway.

And that, apparently, was when Bill asked for me.

Growing up, he had not been kind. I did not serve much purpose, and he always made that clear.

But here was purpose.

Driving there was hard. The flashbacks were really awful. He lives in a slice of isolated coastal country where the last gas was half an hour ago. Halfway there, I had to pull over and send my wife a simple text:

“This is really hard.”

The signal died after I pulled out and kept driving.

When I walked in, I saw the agreement, written in the wrinkles of his thinning face and in the dark mahogany of his eyes. To agree to lie to each other, to buy into his new life; where his grandchildren love him, his grieving wife works through his death, neighbours call and cry over the news, and not pull out the spikes and claws of the past. The invoice for his words and actions against me needed to fall to dust. And he asked me for that now with his eyes.

In a way, his last days were his best. He lived as the center of attention, as he should; his history of catastrophic choices was shelved, the door closed on it.

I’m not sure that he was ever so liked as he was in his last month.

Trust remained a problem for him. I don’t blame him. Beneath his pretence, as though my walking into his house was the most normal, expected thing, doubt sat waiting. I told him we were moving him from the flat bed in his dark room to the crank-up hospital bed his wife’s son-in-law had assembled in the living room, where he could see the harbour and the sun. I told him I was going to lift him. And I saw fear. It flashed through his eyes; the doubt that this had been part of my grand revenge scheme, to gain his trust and then throw him in some final act of vengeance. He was in shock when I settled him into the wheelchair; his eyes were endless. He simply couldn’t understand.

For the most part, neither could I. But that didn’t matter. I had gone where I was needed. It was the only human thing to do. Seeing him marvel at that broke my heart. Imagine living life without grasping the concept of kindness.

I began to understand my father.

Later, on the couch, his wife Shelia pointed out that we were sitting like twins; exactly the same posture. I started watching, studying him. Every minute was like a graduate study of my own psyche. So many answers to why I do the things I do; mannerisms, tone of voice, the fast judgement of fools, all of my habits sat beside me in the form of this dying man.

His workshop was perfectly organized, with all things labelled, right down to the size of nails and screws. I’ve always been frustrated by why I waste time trying to do that, when it always becomes a grand mess anyway. Now, I knew.

I suddenly knew a lot of things.

In the photo album he gave me, I finally saw it. The happier kid he had been growing up, the awkward terror in his wedding photos, the confusion and accusation in my own young eyes, this child who wanted him to be something he just didn’t have the tools for.

I had come into his life needing him at a time when he just didn’t know how. And he saw it every time he had looked into my young face.

I can’t imagine how that must have felt for all those years that we warred against each other.

I asked him to ask me anything. Anything at all, and he would have his answers.

We talked for four hours.

He told me how to fix my water heater. He told me to take his tools to work on my house. He showed me how to snip and grind down the spikes in my attic roof so that I could insulate it. He spoke kindly and supportively and without malice, and the small boy, hidden inside the armour of the grown man I became, cherished every word.

He asked me if he had done it right, by refusing the chemo. He wanted my opinion. On something as massive as his death. And, when I told him he had chosen the right path, and that an unknown number of weeks spent nauseous and in pain would probably kill him anyway, that there would be no miracles here, that he could go soft or he could go hard, and he was choosing soft, I watched relief flood him. He wanted to hang on until my brother could get here. He hoped he hadn’t blown that by refusing the chemo. Both the doctor and I wanted him to avoid that misery that wouldn’t make any difference to when death would come.

Weeks later, Shelia told me the nurses were coming every day, and so were the drugs, and she didn’t know why. I knew what that meant.

I called my brother and told him that it was happening. There were much fewer flashbacks on the drive there this time.

Nurses know death. We can smell it. We can read it in the air. And it was thick when I arrived. He was heavily sedated, and fighting the drugs and death every second. He was holding on. His wife thought he was sleeping, but he was actually fighting through the sleep.

I have no idea how he had the strength to raise his hand and lay it on mine. It should have been impossible. 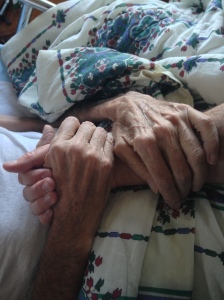 I told him what was happening. I told him it would soon be over. I told him I was here, and everything would end well. I told him he would not feel pain, like he feared he would.

Steve spoke, and I told Steve how Bill was responding. How he was fighting through the blanket of drugs to talk, to form words that he couldn’t, to say all those things the dying have to say. I watched my father’s tears crawl from his dying eyes. I choked out to him that we were here together, here at the end, and that we always would be, and to Steve that he was trying to speak and nod and cry, and that he could hear everything Steve was saying, and not to stop, not to stop until he was finished and got everything out, and that Bill was using every ounce of life he had left to listen and talk. I told Steve he was smiling. Steve’s words were the careful, ready words of a soldier and a son. We all cried; a trio of torn souls over a hissing phone line.

When the call was done, I finished the agreed lie that wasn’t a lie anymore.

I held his thin, bony chest against mine, and listened to his thready, tired heartbeat, fluttering and whispy and fragile and failing.

I didn’t know if I could say it, in the end. But I‘m glad I did. I said what I knew he needed.

My tears ripped loose when he managed a grunt through the meds.

On the drive home, I felt something new.

His wife asked me to write his obituary.  After several visits, I felt I collected enough from the people around him to do it justice.

I think it may just be my finest work yet. 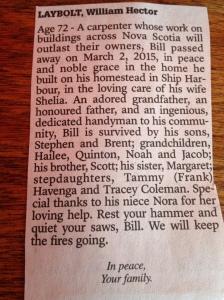 Little Flecks of Inspiration and Creativity

Exploring What Captivates, Inspires, and Intrigues.

Be Afraid of the Dark

Home of Author A. F. Stewart

Embrace the Unraveling of Your Fears

Astronomy, space and space travel for the non scientist